Everyone has a media history somewhere in their dwelling. Mine goes back to vinyl and cassettes. I also have an old Ampex reel-to-reel tape that my late cousin Mark (born 1930) had sent me, always unplayable, but I don't want to discard it.

Old media are essentially like old photographs, which can sometimes be entirely fungible. Even if you don't know who the people are, there's always a hesitation before you throw them in the trash.

(The fungibility of something removes individual essences, so it's wildly ironic that a photomosiac--one of the more fungible things in pop culture--sells for $70M in a Non-Fungible Transfer (NFT--"Nifty"). Of course it's a stunt, but the NFT artists are hardly making that point with their art--or maybe they are).

A few days ago, I stumbled on a bag of old cassettes in a storage locker. They were cassettes of radio shows I had recorded in the early 90s. It brought back fond memories of my musical past, specifically when I was fascinated by world music beginning in the late 1980s.

The Passport show, as well as Afropop Worldwide on Chicago Public Radio (WBEZ), were some of the shows I truly loved and what got me into world music which consequently had a profound effect on my music.

I took pictures of them as a rite of passage before discarding them. Would I bother to pull out my 4-track cassette machine to play them? No, all this material  is probably on the Internet, if not all on YouTube.

Back in 1993, pre-internet, there weren't websites that would have published playlists, so I'd have to write them on the card as I heard them.

Here's one "contact sheet"--a "photomosaic" of what I was listening to in 1993, with a Playlist for some of the items:

Mediums are alive. They have souls. 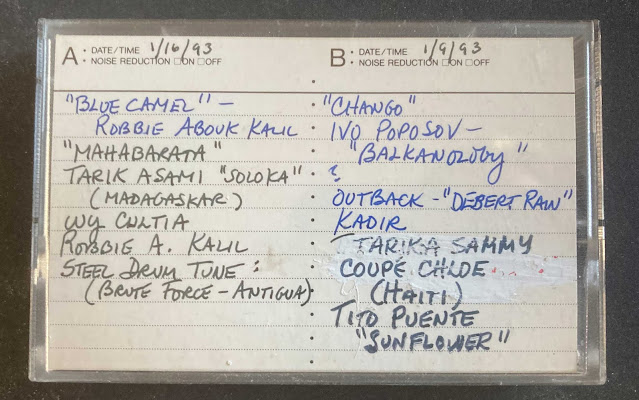