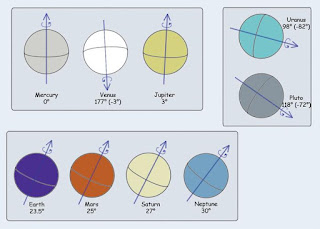 One of the great things about observance of holidays is that it reminds us of the consistent cycles on the Earth. We also use cycles as metaphors, such as the seasons metaphor in the book The Fourth Turning. According to the Fourth Turning hypothesis, we are currently in winter (Crucifixion), and Easter perhaps is a way to think about the spring (Resurrection) that might be coming--although we don't know exactly when.

Cycles also remind us of the consistency and reliability that supports life on Earth.  If the planet developed a wobble for instance, there would be no reliability in the seasons, and consequently would disrupt life as we know It.

Just as a thought experiment, map the cycles of some other planet to the Earth, for example the cycles of Jupiter, which has a 10-hour day and 80 (named) moons, to Earth. And consider how it would change traditions: Christmas would arrive twice as fast, as would Easter. And the tidal forces from the many moons would disrupt, if not destroy, the planet altogether.

So consistency is something to celebrate on every holiday.

We see climate change as being a major disruptor--and it is--but the seasonal cycles will stay the same. The reason we can see the effects of climate change is that there is another system taking control over the normal system (The Polar Vortex for example).

It's also the consistency of cycles that we can apply to our own lives: The thing that I have noticed in my creative life is that there is a consistent thread that runs through it all. I see this when I go back to my older work and realize that it still has some validity even in the present. There is a stability in my own work, but like the hypothetical I described above, cyclical re-mappings can occur randomly, with extreme tidal forces emerging out of darkness, rogue planets that collide, and leave us scrambling back to consistency and reliability. I believe every person can find this within themselves, rather than from collective meanings and metaphors. We don't have to necessarily believe this is a "winter" or a kind of "crucifixion".

Seasons on Other Planets: